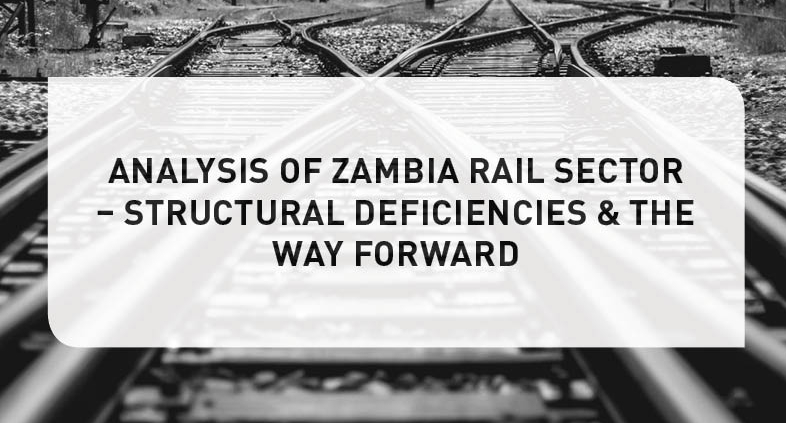 The railway system in Zambia is comprised of an extensive network of surface transport with the potential to offer safe, efficient, and environmentally friendly transport across the country and the region, connecting all major centres of economic activity and facilitating growth.

There are two main players in the Zambian Rail Sector, namely, Zambian Railways Limited (ZRL) and Tanzania-Zambia Railway Authority Railway Authority (TAZARA). ZRL is wholly owned by the Zambian Government and manages a rail track covering almost 1,000 km. Since the time of concession from 2003 to 2012, the tonnage moved on rail had declined drastically from 1,323,191mt in 2004 to 690,793mt in 2009. This was due to a lack of investment in track rehabilitation and infrastructure upgrades by the concessionaire. After the cancellation of the concession on 10th September 2012, tonnage moved improved marginally to 702,603mt in 2017.

TAZARA on the other hand  is co-owned by the Governments of Zambia and Tanzania. It is a key railway that covers approximately 1,900 km from Kapiri-Mposhi in Zambia to Dar-es-Salaam in Tanzania. Amidst daunting operational challenges, TAZARA’s annual freight traffic volumes hit a low of 122,473mt in 2015 compared for instance to figures of over 530,000mt in 2010.

Challenges in the sector

The railway traffic dwindled to current levels following the deregulation of road transport in the region, due to high fixed costs, low investments in rail track infrastructure, working capital and rolling stock. There is also a lack of integration among railway companies within the region who have opted to operate as autonomous entities. The average speed of locomotives has also averaged 40km per hour, which is too slow for modern business.

Another challenge relates to the fact that TAZARA and ZRL have insufficient locomotives and wagons. For instance, in 2014, ZRL had a total locomotive fleet holding of 37, out of which 24 were operational while 13 were defective and extensively cannibalized.

The Seventh National Development Plan (7NDP) prioritizes the construction of new rail spurs and the rehabilitation of existing lines to increase operational efficiency, reduce the cost of freight, and increase the tonnage being carried. Furthermore, the Government has pledged to encourage private investment in the construction of other rail spurs, including intra-city transit systems. Plans are also in place to migrate the rail gauge from the existing Cape gauge to Standard gauge to enable higher speeds and higher tonnage of freight. In 2012, Government nullified its concession with the Railway System of Zambia (RSZ) in 2012, leading to an 18% growth in the traffic of ZRL between 2012 and 2017. In October 2018, The Industrial Development Corporation (IDC) Board approved an investment of $850 million into rail infrastructure and rolling stock for ZRL. This investment is important because it is a wholesome package intended to alleviate capacity constraints of ZRL.

In January 2012, Government brought into effect a Statutory Instrument (SI) to compel transporters of heavy cargo to move 30% of bulk cargo from road to railway in order to optimize the transport sector and promote the sustainability of the rail subsector. The implementation of the 30% quota system is aimed at preserving road infrastructure as well as increasing revenue and efficiency in the railway operations.

This article is an extract from a PMRC Analysis of Zambia Rail Sector – Structural Deficiencies & the Way Forward. . To access the analysis visit www.pmrczambia.com