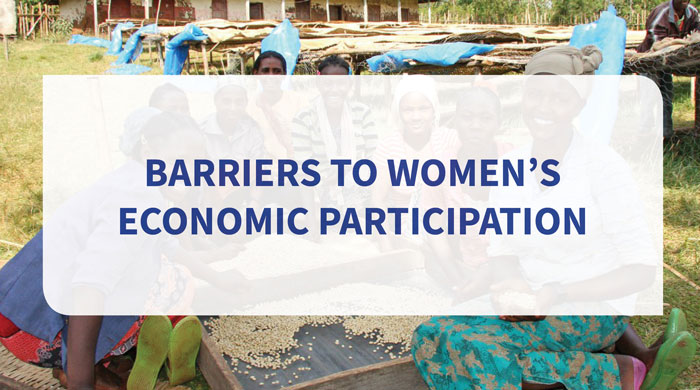 Various studies have shown that the lack of childcare services is a major barrier for working women in developing countries. In the absence of affordable childcare facilities, working women have no option but to alter the amount and type of market work to engage in so that they can be able to balance it with household responsibilities. Women’s ability to afford childcare services is also dependant on the number of children that they may have. As the number of dependent children increases, the cost of childcare becomes higher, which may result in women dropping out of the labour force to take care of their young.

The lack of childcare services is less onerous in countries where extended families predominate. In many African and South Asian economies, children are not a major barrier to the female labour market participation, and childbearing does not reduce \the working life of females relative to males. However, the physical demands of childbearing and childcare make it harder for women and girls to seek education, training, and employment away from home which hinders their economic participation and opportunity.

Not having a school within easy reach of home is an important barrier to girls’ enrolment. Lack of childcare not only affects women but girls as well as most often girls take up the responsibility of taking care of their younger siblings. Lack of child care facilitates in such a case would result in girls dropping out of school to take care of their younger ones. Equally societal norms that require women and girls to take on the responsibility of most household chores hinder girls from acquiring an education. Lastly in developing countries which have high poverty levels especially in rural areas tend to have high dropout rates due to the cost of education which may not be affordable for certain household.

A significant barrier to better health for women is the lack of access to family planning services, to help plan for the number and timing of pregnancies. The various aspects related to maternity impose a substantial burden on women’s time. And this is of course a biological burden uniquely borne by women. Moreover, maternity is not only a burden in terms of time. It is also risky and often imposes on women a substantial burden in terms of health. Tzvertkova, 2017

Since the start of the global HIV epidemic, women in many regions have been living with HIV and AIDS-related illnesses remain the leading cause of death for women aged between 15 and 49. HIV disproportionately affects women and girls because of their unequal cultural, social, and economic status in society. Intimate partner violence, inequitable laws, and harmful traditional practices reinforce unequal power dynamics between men and women, with young women particularly disadvantaged. HIV is not only driven by gender inequality, but it also entrenches gender inequality, leaving women more vulnerable to its impact. Global information and education on HIV and AIDS, 2019

Lack of access to credit both formal and informal is another major barrier, often restricting women’s ability to smoothen consumption over time and undertake productive activities. The Global Findex, a comprehensive database measuring how people save, borrow, and manage risk in 148 countries, reveals that women are less likely than men to have formal bank accounts. In developing economies women are 20 percent less likely than men to have an account at a formal financial institution and 17 percent less likely to have borrowed formally in the past year. Even if they can gain access to a loan, women often lack access to other financial services, such as savings, digital payment methods, and insurance. Restrictions on opening a bank account, such as requirements for a male family member’s permission, restrict women’s access to accounts. Lack of financial education can also limit women from gaining access to and benefiting from financial services (Isaac, 2014).

Property that is acceptable as collateral, especially land, in some cultures is usually in men’s names which may be unacceptable by formal financial institutions. Given the heavy household responsibilities such as childcare, taking care of the sick and elderly among others, restrict women’s working hours and mobility in ways that affect their economic participation. Women’s businesses thus tend to be smaller-and grow slower-than men’s. They are also more likely to be home-based and to be in sectors that are technologically unsophisticated and overcrowded to the point of market saturation. These business characteristics mean that women entrepreneurs are perceived as poor credit risks hence may not be awarded loans from lending institutions.

Legal and regulatory barriers prevent women in some countries from fully participating in formal labour markets. The World Bank’s 2016 report on Women, Business, and the Law offer a stark picture of the ways in which laws and policies continue to undermine women’s economic productivity. Of the 173 economies surveyed, 90 percent have at least one regulation on the books that impede women’s economic opportunities. Gender-based job restrictions remain common: about 100 countries impose limitations on the jobs that women can hold. In thirty economies, women face a constellation of barriers, with ten or more laws inhibiting women’s economic participation on the books, and in eighteen countries, husbands or male guardians can legally prevent women from working altogether. These obstacles have a multidimensional effect of women’s opportunities: lower levels of gender equality in national laws are associated with fewer girls attending secondary school, fewer women in the formal workforce or running businesses, and a wider gender wage gap. (Vogelstein, Tackling Barriers to Women’s Economic Participation, 2016)

In almost all societies, women are perceived as primary caretakers/ homemakers, while men take on the role of providers. Women frequently have to withdraw from the labour market because of the demands of marriage and children. Women are therefore more likely to choose jobs that allow them greater flexibility in hours worked, which often results in a drop in earnings. Women also lag behind men in the accumulation of human capital as a result of discontinuity in employment which may be one of the leading factors of low participation rates as well as poor advancement in careers.

Socialization plays a critical role in the upbringing of children. From a young age, females are expected to play a motherly role as well as that of a caregiver. In most societies, girls aspire to marriage as opposed to having a career. What is deemed as being socially acceptable in most cultures is for women to get married and to start a family as opposed to career advancement. Most cultures respect married women with children more than their spinster counterparts hence forcing women to aspire more to marriage than advancing their careers.

The age at which many women begin to think about starting a family coincides with one of the most productive periods of one’s career. Given women’s biological clocks, most tend to start a family as oppose to advancing in their careers.