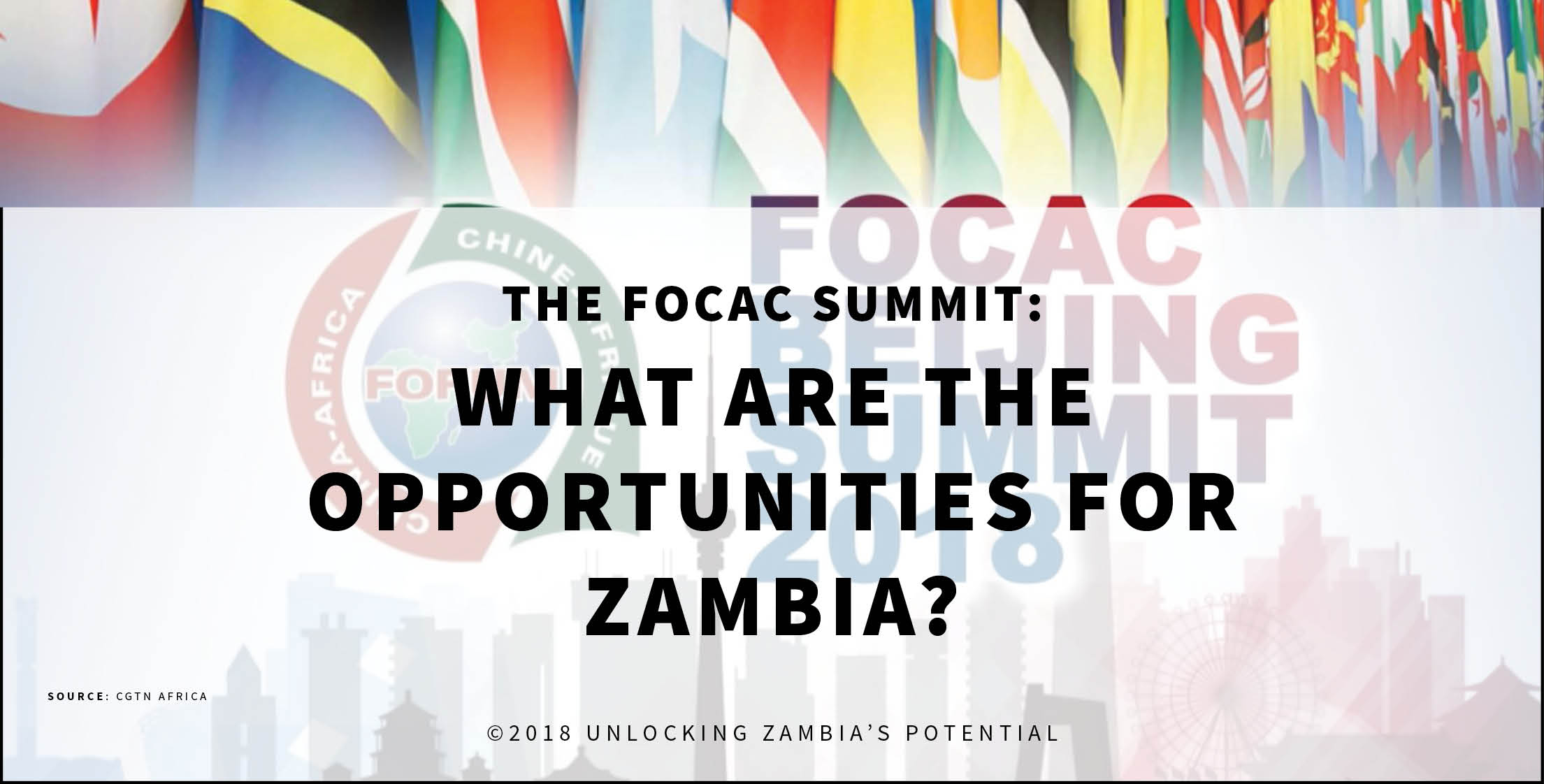 The 3rd edition of the Forum for Africa – China Cooperation (FOCAC) came to an end on 4th September 2018.  We now reflect on what has been deliberated and more so what Zambia has benefited. The FOCAC summit is a meeting between China and Africa and is largely premised on ways to increase diplomatic, economic and bilateral ties. This year’s edition theme was “China and Africa: Towards an Even Stronger Community with a Shared Future through Win-Win Cooperation.” Established 18 years ago, FOCAC has led in spearheading international cooperation with Africa and has become a significant marker of South-to-South cooperation. One of the major deliverables of the summit was to link the Belt and Road Initiative with the United Nations (UN) 2030 Agenda for Sustainable Development, the African Union’s Agenda 2063 and individual countries’ development plans to explore new territory for Africa’s revival. This therefore means that African countries positioned to negotiate the most beneficial trade and economic deals in alignment with their individual development paths and plans. The 2018 summit also unveiled two key outcome documents, namely; The Beijing declaration and Beijing Action Plan that outline the new nature of China-Africa relations.

During the FOCAC summit, 8 new initiatives were announced backed by a new US$60 billion support to Africa for the next 3 years. These are:

To ensure that these eight initiatives are implemented on the ground, China will extend US$60 billion of financing to Africa in the form of Government assistance as well as investment and financing by financial institutions and companies. This will include:

We also observe that in addition, for those of Africa’s least developed countries, heavily indebted and poor countries, landlocked developing countries and small island developing countries that have diplomatic relations with China, the debt they have incurred in the form of interest-free Chinese government loans due to mature by the end of 2018 will be exempted.

What are the Opportunities for Zambia? What has the country managed to secure?

During the FOCAC summit, the Republican President Edgar Lungu and Team of ministers have been negotiating trade and economic deals for the country aimed at complementing the development efforts as enshrined in the Seventh National Development Plan. Some of the major agreements and MOUS’s that have been signed include the following:

The Republican President further met a total of 15 companies and investors expressing interest in a wide range of investment destinations ranging from biotechnology, railway construction, hydropower, road construction, housing – infrastructure in general and other priority areas where Zambia wants to invest and develop. PMRC backs the President’s call for a win- win approach to any form of investment and business explorations in Zambia.

PMRC has been actively pursuing a win package for Zambia, having been involved in several exchanges with “special FOCAC technical committees” during the pre FOCAC deliberations. Our main submissions have been bordering around a positive scenario for Zambia’s growth anchored on Mining, Agriculture, Energy, Manufacturing and Commerce. We have also been submitting on the need for technology transfer and capacity building initiatives to equip the young people with practical industrial expertise. We have further been submitting on the need for industries to be set up in Zambia to support our quest of being a manufacturing hub in the region. Observing the resolutions from the FOCAC, PMRC remains hopeful that Zambia has been able to negotiate some agreements that will compliment our development path as anchored in the Seventh National Development Plan.

As the 2018 FOCAC dawned to a close, the challenge remains on the African countries, not to lose sight of their shared development path and quest for integration, amidst development initiatives and financial pledges from China. The AU Continental Free Trade agenda remains one of Africa’s landmark undertakings that would promote integration and trade among others. The challenge for Zambia is to continue negotiating for the best deals especially those aimed at promoting development of manufacturing industries and industrial parks to promote value addition especially in agriculture and mining. Furthermore, Chinese high-tech companies should be encouraged to set up numerous development bases in Africa to promote technology transfer. This should extend to agriculture demonstration centers and other advanced methods that would promote crop diversification and larger yields.  Zambia’s prospects for diversification away from mining are within the agricultural sector given our rich natural resource endowment. Initiatives such as the recently signed protocol at the FOCAC for the export of Zambian honey to China are welcome but this should be extended to other products to lessen the country’s dependence on copper exports, as the main source of foreign exchange. Copper exports have proved to be unsustainable due to international price volatility.

Considering the limited role that domestic investment plays in financing Zambia’s diversification, foreign capital especially under the platform of Public Private Investment may be essential for financing infrastructure and large-scale modernizations required for a successful diversification strategy in Zambia. Foreign Direct Investment into Zambia has the potential to increase both physical and human capital accumulation. Physical capital would accumulate if Chinese firms invest in buildings, machines, and tools that would increase production of domestic goods. Human capital would accumulate when professional know-how and skills are transferred to Zambia, through employee training, efficient organization and manufacturing structure.

In recent years, China-Africa people-to-people exchanges have grown, but still lag behind economic and trade cooperation. China-Africa people-to-people exchanges should pay special attention to the needs of young Zambians since they account for a large percentage of the population and face challenges such as unemployment. FOCAC presented a platform to discuss the plight of the youth unemployment and with initiative number five (5) on capacity building, we submit that more innovation hubs and entrepreneur centres should be established to promote skills development in the country. Long-term, sustainable China-Africa development depends on providing socio-economic opportunities for the young people from both sides and this initiative must be pursued strongly by the Ministry of Youth and Sports in collaboration with the Ministry of Labor.

In conclusion, Africa should not lose sight of its own development path with initiatives such as the Continental Free Trade Area (CFTA) agenda and open skies initiative; in view of the Chinese Belt and Road Initiative. Africa should be more united and pursue a joint strategy on how to engage China better. It is a matter of fact that China remains Africa’s number 1 trading partner but the question remains; how much more are African countries also looking to strengthen trade within themselves, in view of this massive injection of funds from China?  PMRC submits that Africa should still pursue its own home grown development path funded by domestic resources and promotion of trade and integration within the continent.   With the eight (8) initiatives stamped at the FOCAC shaping the new path of China Africa relations, Zambia should strategically align programmes to benefit from the broader development commitments. The country should however not lose sight of its quest of focusing on homegrown development initiatives amidst these opportunities from the FOCAC.  On the MOU’s and business agreements signed, PMRC welcomes the new market for Zambia’s honey as this will further promote the sector and generate revenue for the country. We further call on government to extend this to more products so as to support the growth of the Agriculture value chain. It is also gratifying to note that China is joining in the quest to decongest the capital Lusaka. We are aware that India is also supporting this project with the proposed construction of fly over bridges and the speed trains will promote mobility within the city. We however advise that Zambians should be priority to partner on these projects for employment and technology transfer. The success of these deliberations and agreements depend on how vigorously the country will pursue follow up implementation sessions and also constantly engaging with the economic and trade partners. PMRC further advises Government to continue pursuing policies that promote the livelihoods of the citizens and also create employment opportunities for the youth.