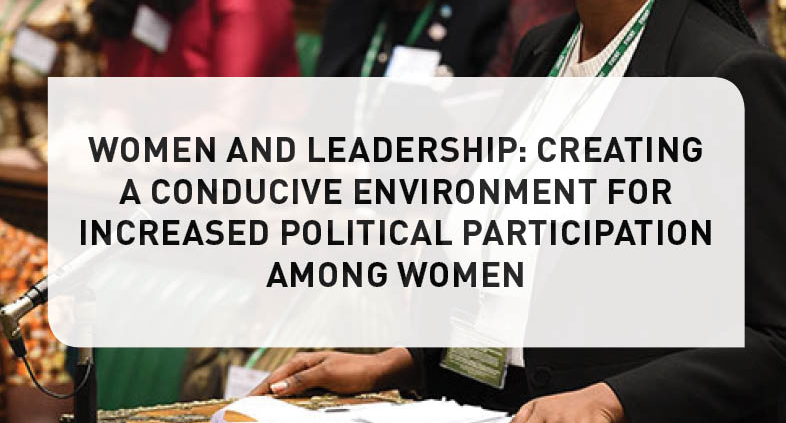 Zambia has made substantial efforts in trying to mainstream gender and promote women’s participation in political leadership.  However, women continue to be under-represented in the formulation of national policies as well as in the political and economic decision-making spheres due to the various social barriers. One such barrier relates to how the political landscape is characterized and often portrayed with a male ‘face’. Additionally, the political space also tends to be marred with violence and character assassination which poses a major challenge for women to navigate.

The Zambian Government has noted that equal participation of men and women in decision making is a precondition of a functional democracy. To this effect, the Government continues to express strong political will to enhance women’s political participation in the overall national development agenda. Early this year, the Minister of Gender, Hon. Elizabeth Phiri expressed concern over the significantly low numbers of women in politics and leadership positions. She called for the adoption of a Zebra List that seeks to achieve gender parity. A Zebra List is a strategy that will subject all political parties to adopt an equal number of women as men to various positions in order to increase women’s seats in parliament and in decision making positions. In essence, the Zebra list is a marker of good governance because it addresses the gender-power dynamics and structural issues that act as barriers to the political advancement of women.

What needs to be done?

In the build-up to the 2021 elections, stakeholders such as civil society organisations, non-governmental organisations, the media, individuals, political parties and the Government should strive to create a conducive environment to encourage more women to aspire to leadership roles across all party structures. It is through these efforts that gender parity will be achieved and more women will transcend the various barriers that exist in barring them from fully participating in national development and politics.

In spite of significant efforts by the Government, a number of barriers still exist that limit the political participation of women and their advancement to leadership roles. However, various policies and enablers could enhance women’s influence and willingness to take up these roles. At a policy level, the Zebra List will help achieve gender parity by increasing the number of seats women hold in parliament and in decision making positions. Equally, there is need for key stakeholders to continue raising women’s consciousness to take keen interest in politics and national development as equal partners in governance and the development agenda.

This article is an extract from a PMRC analysis titled: “Assessing levels of participation among women in policy formulation”. To access the analysis visit www.pmrczambia.com

Blog – Zambia’s Power Sector Reforms: “The Light at the end of the...
Scroll to top