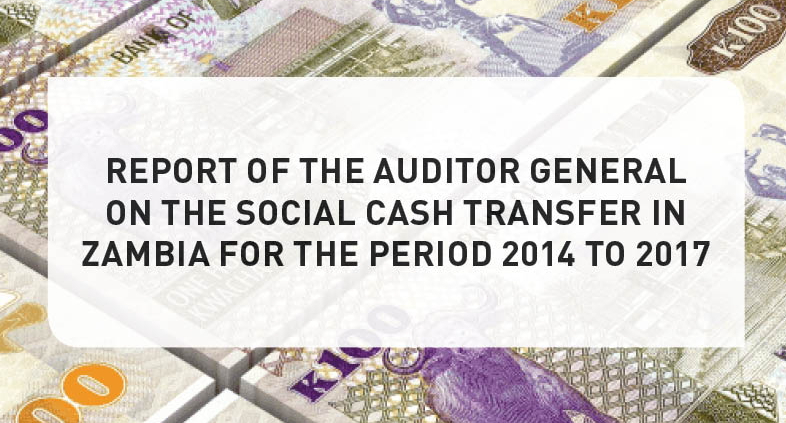 Poverty is a socioeconomic ill that has continued to affect a significant portion of the population in Zambia. About half of the population currently lives below the poverty line. The situation is even worse in rural areas where an estimated 76.6% are classified as poor. The Government through the Ministry of Community Development and Social Services implemented the Social Cash Transfer (SCT) Programme as one of the measures for reducing poverty levels in Zambia in line with the second pillar of the Seventh National Development Plan.

The SCT programme is a component of the Social Protection mechanism, which seeks to reduce the vulnerability of low- income households with regard to consumption and access to basic services, among others. The Scheme is a response to the HIV and AIDS Pandemic, which had led to a growing number of households with no adult breadwinner and to households headed by elderly persons, children and chronically ill persons.

The Office of the Auditor General in accordance with Article 250 of Constitution of Zambia (Amendment) Act No. 2 of 2016, the Public Audit Act and the Public Finance Management Act conducted an audit to assess the efficiency and effectiveness of the Social Cash Transfer Programme towards the reduction of extreme poverty among beneficiary households. The following were the audit findings;

The extent to which the Ministry had ensured that only eligible people benefit from the SCT Programme.

The Ministry paid a total of K2,053,800 to 2,284 ineligible beneficiaries for periods ranging two to one hundred and forty months. Only 76 out of 8,558 of the purported to be disabled had a medical or certification from the Zambia Agency for Persons Living with Disabilities to confirm their disability.

Payments to beneficiaries were delayed for periods ranging eight to three hundred and thirty-two days. The Ministry did not regularly review the transfer amount in the period under review to reflect the inflationary adjusted amounts on an annual basis. Furthermore, between 2014-2017 the Ministry spent administration cost of K317,748,992.42, which was 42% of the transfer value of K760,516,736.29.

A Case Study carried out in Gwembe district showed the SCT made improvement in a number of parameters among beneficiaries namely; the number of meals taken per day, agricultural assets, house dwelling, sanitation and lighting among others.

Zambia has made tremendous strides with regards to the rolling out of the SCT programme which is a clear illustration of how political will and a favourable political space can sustain the scale-up process of a cash transfer programme. The major challenges that the SCT programme is facing are high administration costs, delayed transfers as well as inclusion of ineligible beneficiaries. These challenges can be curbed by migrating the SCT programme from the traditional cash transfers to an electronic platform which has the potential to cut costs, reduce leakage, improve accessibility and provide better security compared to physically delivering cash to fixed pay points.

This article is an extract from a Report of the Auditor General on the Social Cash Transfer in Zambia for the Period 2014 to 2017 analysis. To access the analysis visit www.pmrczambia.com