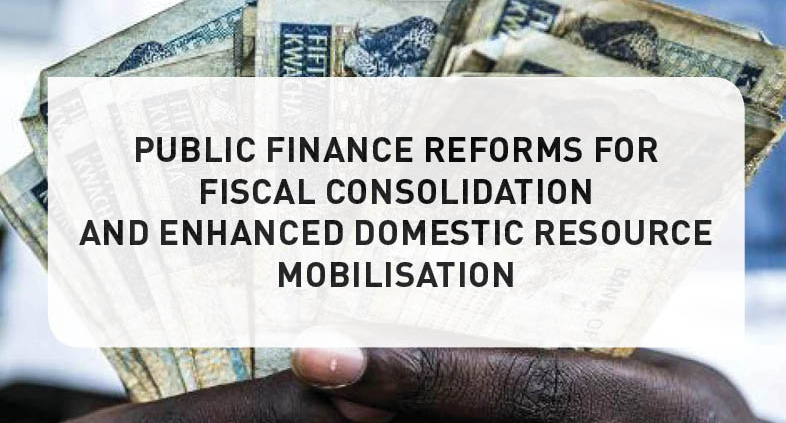 Public Financial Management (PFM) reforms entail changes to laws, systems and processes used by Governments, to mobilise revenue, allocate public funds, undertake public spending, account for funds and audit. A strong PFM system is essential for effective Governance because effective delivery of public services is associated with poverty reduction and growth. To this effect Government has made reforms to the Public Finance Management Act and has intentions of reviewing the Public Procurement and the Loans and Guarantees Act;

Public Financial Management (PFM) Act of 2018; From 2004 when the PFM of 2004 was enacted, few PFM legal reforms occurred. There had been challenges in achieving the intended purpose of the Act because of gaps such as absence of portions for handling cases of financial misconduct. The Revised PFM Act of 2018 came into effect due to stakeholder’s request as well as Government’s own realization to strengthen the legal framework aimed at improving management of public resources.

Public Procurement Act; In 2015, Government introduced an electronic Government Procurement (E-GP) system aimed at enhancing transparency, riding the Government system of corruption and supporting provisions of the PFM Act. The E-GP system is designed to enhance socio-economic development and adherence to the national development plan by reducing the procurement cycle and associated costs. However, the current procurement system features structural and content inadequacies to support the PFM Act leading to avoidable losses for the Government. There are inadequacies in fund release delays and inflated quotations, affecting project implementations and contract management. For this reason, there is need to revise the Public Procurement Act to  incorporate price referencing and bench marking to seal revenue leakages.

Enactment of the Planning and Budgeting Bill of 2019. Once enacted this legislation will help to ensure that there is an increase in transparency, accountability and citizens participation in public finance management. The poorest in society will be incorporated in decision making especially on matters that hinge on budgeting. The powers which lie in Cabinet and Parliament on budgets and plans will be equally distributed among citizens and their representatives.

Review of Loans and Guarantees legislation; This will empower Parliament to monitor debt contraction by the Executive. The Minister of Finance will be compelled to table before Parliament justifications for contracting debt. This will guarantee debt sustainability for continued economic growth and therefore enhanced public finance management.

Legislative reforms from the expenditure side of the budget need to be matched with reforms to the revenue side through enhanced DRM. DRM refers to the generation of Government revenue from domestic resources. Tax revenue, as a percentage of GDP is one measure of the degree to which the Government controls the economy’s domestic resources.  In the 1970s Zambia’s tax revenue as a percentage of GDP was 42 % compared to 15.2% in 2017 and 19.1% earlier projected for 2021 [ this figure has since been downgraded in view of the COVID-19 pandemic]. The statistics mean a lot needs to be done to raise domestic revenues given the hard-to-tax informal sector in Zambia. The informal sector’s tax potential in Zambia is about 42% of total tax revenues. Amongst the several strategies that could be used to enhance DRM is the need to upscale the Massive Land Titling Programme which can enhance payment processes from ground rates.  There is also need to equip revenue administrators with knowledge and tools to raise revenue in the hard-to-tax sectors through the use of intermediaries.  The need to fight tax evasion through early detection cannot be overemphasied. This could be achived through , smarter auditing,effective investigation and prosecution that hold evaders accountable and thus create public confidence in the tax system.

This article is an extract from a PMRC Analysis of the Public Finance Management Act and the Domestic Resource Mobilisation infographics. To access the analysis visit www.pmrczambia.com