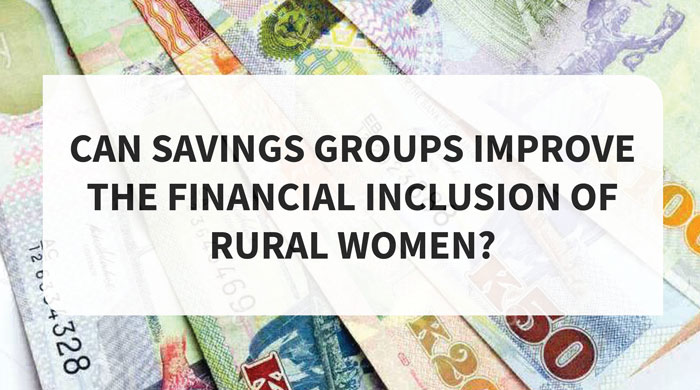 Brannen and Sheehan-Connor (2012) argue that savings groups have the potential to facilitate access to financial services in remote areas where formal financial services may not exist. Moreover, members can borrow up to three times their savings if funds are available, while interest is generated on an individual’s total savings. Thus, encouraging members with a higher capacity to save more while also discouraging members from borrowing for unproductive causes. Annan et al. (2013) also suggest that informal savings and lending initiatives could potentially alleviate rural poverty through access to affordable credit and encourage saving among members. This assertion proves true among women in rural parts of the country, who may be reluctant to access loans from formal lending facilities that charge high-interest rates and often require collateral to access credit. Hence, savings groups offer an alternative source of capital and financing for women seeking to participate in economic ventures.

Notably, is that savings groups are one of the most inclusive financial initiatives and are relatively easy to run and engage in. According to a survey conducted by FSD (2018), the uptake of savings groups was not dependent upon one’s level of education in comparison to other financial services such as banking, insurance, pension funds, and capital markets. This means that anyone was capable of running and joining this program. Data from the same survey also indicates that more female respondents reported being part of savings groups and Chilimbas than men. This can be attributed to the fact that these initiatives are community-centric and gendered social norms entail that women are more inclined to community social interactions than men, making them more attractive for women to save with such programs. Furthermore, the survey concluded that Savings Groups and Chilimbas were the most inclusive financial services for Zambian women and more rural women were willing to take up these services as opposed to formal financial services that required some level of education, as well as a higher socio-economic status.

In addition, eligibility for a loan with savings groups is fairly relaxed. There is no documentation or collateral required to access a loan, other than being a trusted member of the group. Another attractive feature is that interest generated is shared among group members thus, acting as a ‘return on investment’ even for borrowers. Furthermore, there are no delays in processing of loans since they are obtained during meetings at each saving, while banks and other formal financial service providers on the other hand, often delay the process due to documentation and bureaucratic procedures in assessing one’s eligibility for a loan. Some of the requirements by banks and other formal financial service providers include; a copy of National Registration Card (NRC), latest payslip, latest utility bill or confirmation from employer, salary account bank statements for the last 3 months, employment contract and collateral in some cases. It must be noted that many of these women do not engage in formal employment and often do not have formal contracts with employers. Moreover, many of them engage in small-scale agriculture and roadside businesses, making it challenging to have a steady and predictable flow of income. In addition, evidence from the 2015 Finscope Survey indicated that while 93.5% of adults had access to an NRC, only 15.9% had access to a proof of residential address document. These findings suggest that formal banking requirements to access loans do not take into consideration the circumstances of rural households, thus they are excluded from these services on this basis.

A baseline survey conducted by Rural Finance Expansion Programme (2018) found that women were better savers and less likely to default on paying back loans than men, however, they had limited access to financial services in comparison to men. The survey also suggests that the rise of mobile money presents great potential for enhanced financial inclusion of women. In relating financial inclusion through digital money services, at least 74% of survey respondents reported to have owned a phone and 95% that reported to use mobile money services indicated that they were ‘comfortable’ to ‘very comfortable’ with the use of these services. The same study found that Zoona was more popular in the rural areas than Airtel and MTN mobile money services with 58% having used it to receive, while 38% used it to send money. However, less than 4% indicated that they used the service to store money. Hence the need to integrate these services into how savings groups conduct their business and encourage the use of these services for saving purposes.

Report of the Auditor General on the Status of the Social Cash Transfer in Zambia...
Scroll to top