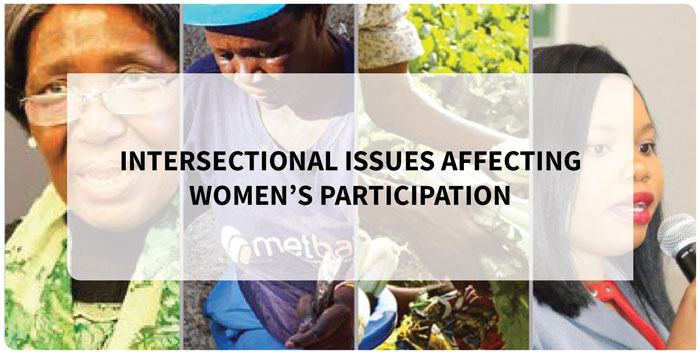 Women constitute a heterogeneous group with different characteristics and unique qualities. Within groups of women it is important to be cautious of their positionalities and not assume homogeneity of the group (Akerkar, 2001). In society, various factors tend to converge to hinder women from participating in political processes such as policy formulation. These socio-economic factors include; levels of education, physical ability, age, location, race, culture, religion, sexual orientation and economic class. These factors cannot be considered in isolation as they are intersectional in nature. For instance, a middle-aged, middle-class woman with higher levels of education, living in a low-density urban area is more likely to participate in a policy formulation exercise in comparison to a middle-aged, working-class woman with lower levels of education residing in a high-density informal urban setting and facing some type of physical disability. Likewise, a woman who is a peasant farmer living in a rural area without basic education is less likely to assume she could influence policy. The individual characteristics and positionalities of the women in the contexts highlighted shape their perspectives differently. Thus, impacting their participation or lack of.  Policymakers need to take into consideration how these factors influence ones’ participation in policy formulation and find ways to reduce these barriers. Assuming that women have the same needs or face the same challenges could lead to poor participation levels among them and also under-plays the power and influence that some women wield over others.

Moreover, there are multiple factors that could hinder different women from participating in the policy-making discourse. These barriers could be structural in nature or agency barriers (William, 1992). Broadly, structural barriers are those that are embedded within systems or processes that may hinder an individual from exercising their free will or participating in certain tasks. Factors such as; lack of access to education or civic knowledge may prevent an individual from making informed decisions or, the systematic discrimination of women from partaking in socio-political debate based on their gender. Such barriers often entail political interventions such as law reforms or policy actions to facilitate the inclusion of marginalized women. While on the other hand, agency barriers are issues that an individual may experience at a personal level that limits their ability to exercise free will. For instance, the lack of confidence or willingness to participate in an activity are limitations to ones’ agency. These may be resolved through easier interventions such as capacity building, improving the civic knowledge of citizens or raising awareness on the importance of partaking in political processes.However, these barriers may not resonate with women in the same way since what may be relevant to some may not apply to others. Domingo et al. (2015) argue that, contextualizing the various factors could assist in resolving some constraints to an extent but may not provide a solution to all barriers. Firstly, women’s individual capabilities and resources could influence one’s participation. Similarly, socio-political, economic and cultural issues largely shape women’s experiences. As such, these experiences may have a push and pull effect. For instance, if one is more informed or has a certain level of education they are more likely to take an interest in political issues whether it affects them as an individual or as a collective. Conversely, women with poor civic knowledge may opt to shy away from participating in national issues.

Economic class also tends to pose a barrier for women to actively participate in policy issues thus, increasing their vulnerability and further undermining their interests. Enhancing women’s economic potential could accord them more social power and influence beyond the household and community level, further encouraging them to take an interest in national issues. Another barrier is culture and religion. Generally, women are socialized not to challenge the authority of men. Promoting a paradigm shift in society that appreciates and values women’s contributions could not only encourage women to participate but it may also lead to a more gender-inclusive and responsive policy system across all sectors. Thus, challenging various structural issues such as religious values, societal norms and culture is imperative in addressing some barriers that prevent women from exercising their agency.

Generally, women tend to feel more confident when they are in large numbers. Converging with other women that share similar interests may not only boost their confidence but it could also positively influence other women to participate in policy formulation. This could also accord them a safe space to consult, share knowledge and experiences with other women and increase their social power.

Similarly, raising civic and technical knowledge of women as well as the general education and access to information on political issues could contribute to the confidence needed to articulate and challenge policy discourse as well as actively participate. It could also raise their credibility, voice and influence thus giving them more status in society. Interventions such as facilitating trainings, mentoring and capacity building workshops targeted at women could help build their self-esteem, public speaking skills and self-awareness. Furthermore, the media plays a major role in how women are perceived. They act as agents of change but could also be potentially harmful to women’s representation in society. For instance, the media can perpetuate negative stereotypes about women or broadcast images that demean women’s character and strengths. Thus, improving how the media portrays women could influence how society responds to them and increase their confidence as active agents of development.

Additionally, addressing the intersectional issues that act as barriers for the participation of women is vital. For instance, educating women and capacitating them to train others on the importance of their participation could yield positive results. Similarly, engaging in strategic partnerships with various institutions that promote the empowerment of women could assist in engaging more grassroots women at community level. Moreover, strengthening partnerships with men as agents of change and dismantling gender stereotypes could influence change in how both genders perceive the participation of women. NGOs and CSOs are ideal strategic partners that aim at giving women a voice and often offer solidarity and a platform for women to express their needs and concerns on important national and personal issues affecting them. They also play a critical advocacy role in advancing the status of women. They act as important enablers of women’s inclusion and empowerment across various sectors of society.